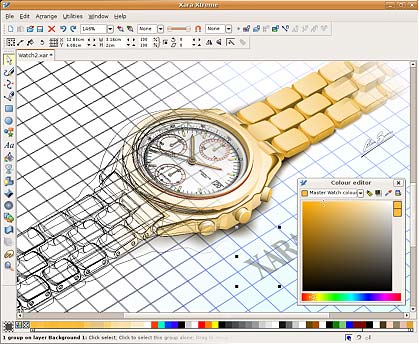 When you think of vector drawing in Linux, do you think only about InkScape? But there are several programs for drawing vector graphics with many features. In this series of articles, I will address several graphics programs available on Linux, starting with a not very known, Xara Extreme.

Xara Extreme
Xara Xtreme for Linux is a powerful general-purpose graphics program for Unix platforms including Linux, FreeBSD and (in development) MAC / OS-X.

Formerly known as Xara LX, it is based on Xara Xtreme for Windows, which is the fastest vector-graphics program available. The source code of Xara Xtreme was released in open source in early 2006 and is being ported to Linux. This process is almost complete and Xara Xtreme for Linux is available for download now.

Linux Version
Xara Xtreme for Linux (or Linux Xara Xtreme Edition) is the open source version of Xara Xtreme. It was formerly called Xara Xtreme LX or just Xara LX, LX is an acronym for Linux. The name “LX” is maintained in some places (eg, the executable is still called “xaralx”).

The first version was released for Linux in October 2005, and Xara Group Ltd. announced it will release the source code for the Linux version (a simplified version) under a free software license, the GPL, and seek help from the community in porting to Linux and Mac OS X using the wxWidgets toolkit.

The 0.3 beta series for the first time, allowed the use of the new file format *. xar to the open source version. Previous versions only supported for opening and viewing packaged demo files which came along the product, to show its capabilites.

Version 0.5 was the first to also have the ability  to save. The current version is 0.7.

A version for Mac OS X is still non working, but it is in development, and there is a call for developers on the project site.